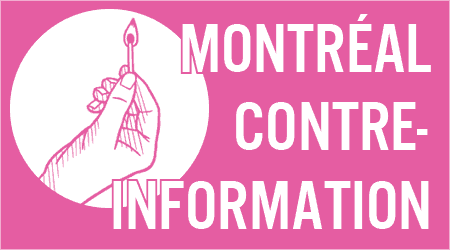 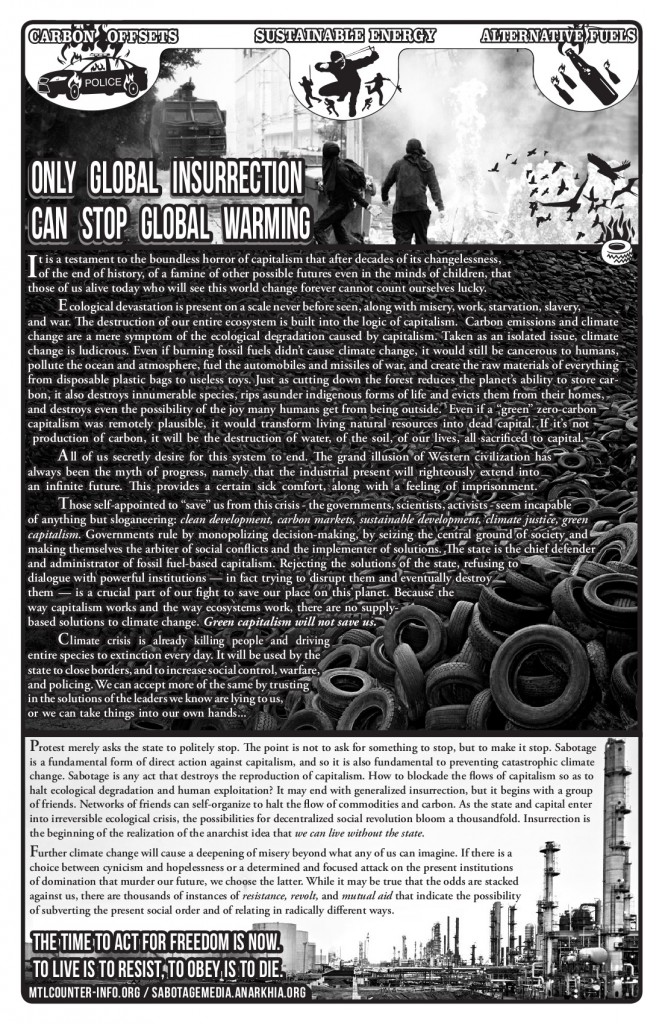 It is a testament to the boundless horror of capitalism that after decades of its changelessness, of the end of history, of a famine of other possible futures even in the minds of children, that those of us alive today who will see this world change forever cannot count ourselves lucky.

Ecological devastation is present on a scale never before seen, along with misery, work, starvation, slavery, and war. The destruction of our entire ecosystem is built into the logic of capitalism. Carbon emissions and climate change are a mere symptom of the ecological degradation caused by capitalism. Taken as an isolated issue, climate change is ludicrous. Even if burning fossil fuels didn’t cause climate change, it would still be cancerous to humans, pollute the ocean and atmosphere, fuel the automobiles and missiles of war, and create the raw materials of everything from disposable plastic bags to useless toys. Just as cutting down the forest reduces the planet’s ability to store carbon, it also destroys innumerable species, rips asunder indigenous forms of life and evicts them from their homes, and destroys even the possibility of the joy many humans get from being outside. Even if a “green” zero-carbon capitalism was remotely plausible, it would transform living natural resources into dead capital. If it’s not production of carbon, it will be the destruction of water, of the soil, of our lives, all sacrificed to capital.

All of us secretly desire for this system to end. The grand illusion of Western civilization has always been the myth of progress, namely that the industrial present will righteously extend into an infinite future. This provides a certain sick comfort, along with a feeling of imprisonment.

Those self-appointed to “save” us from this crisis – the governments, scientists, activists – seem incapable of anything but sloganeering: clean development, carbon markets, sustainable development, climate justice, green capitalism. Governments rule by monopolizing decision-making, by seizing the central ground of society and making themselves the arbiter of social conflicts and the implementer of solutions. The state is the chief defender and administrator of fossil fuel-based capitalism. Rejecting the solutions of the state, refusing to dialogue with powerful institutions — in fact trying to disrupt them and eventually destroy them — is a crucial part of our fight to save our place on this planet. Because the way capitalism works and the way ecosystems work, there are no supply-based solutions to climate change. Green capitalism will not save us.

Climate crisis is already killing people and driving entire species to extinction every day. It will be used by the state to close borders, and to increase social control, warfare, and policing. We can accept more of the same by trusting in the solutions of the leaders we know are lying to us, or we can take things into our own hands…

Protest merely asks the state to politely stop. The point is not to ask for something to stop, but to make it stop. Sabotage is a fundamental form of direct action against capitalism, and so it is also fundamental to preventing catastrophic climate change. Sabotage is any act that destroys the reproduction of capitalism. How to blockade the flows of capitalism so as to halt ecological degradation and human exploitation? It may end with generalized insurrection, but it begins with a group of friends. Networks of friends can self-organize to halt the flow of commodities and carbon. As the state and capital enter into irreversible ecological crisis, the possibilities for decentralized social revolution bloom a thousandfold. Insurrection is the beginning of the realization of the anarchist idea that we can live without the state.

Further climate change will cause a deepening of misery beyond what any of us can imagine. If there is a choice between cynicism and hopelessness or a determined and focused attack on the present institutions of domination that murder our future, we choose the latter. While it may be true that the odds are stacked against us, there are thousands of instances of resistance, revolt, and mutual aid that indicate the possibility of subverting the present social order and of relating in radically different ways.

The time to act for freedom is now. To live is to resist, to obey is to die.